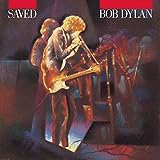 I was thinking about this song, for obvious reasons. I see the current CD release (right) has a different cover than the original (left) on my vinyl… the CD release originally had the same artwork, but that one was very hard to find… but that’s all an aside. Think on the things which follow…

Bob Dylan: In the Garden

On his last evening, Jesus sat down with his closest friends and told them, “I have eagerly desired to eat this Passover with you before I suffer. For I tell you, I will not eat it again until it finds fulfillment in the kingdom of God.” The Passover meal is rife with symbolism. Did it bring strength to Jesus to consider the symbols as the Passover celebration went along? Did his mind wander during the haggadah?

The afikoman was a matzoh that had been hidden until the end of the meal. It was customary for the children to find it and ransom it to the adults — it would then be broken and distributed to everyone at the table, and would be the last thing eaten on that day. The familiar events and sayings of the evening were broken when Jesus said, “This is my body, broken for you.” Something is different. Whether the disciples had realized the significance of the evening before or not, they should have known something different was going on… this Passover was unlike any other. They must have quizzed him.  Read more…

Preparing for Easter… Holy Week Ahead

Firstly, there’s the kids. We’ve got an Easter tradition going now, which I explained last year. There’s still time if you want to start your own tradition with it.

Bob Carlton has announced the Via Crucis Grid Blog 2007, in which more than 50 bloggers participated last year… when I hung back… but I’m thinking about jumping in this year and joining. They’re pretty open, so anyone else wanting to join in should consider themselves invited, I guess. Having already set aside one post that relates to Gethsemane, I think I’ll add one that relates to the institution of the Eucharist and post them both on Monday. I’ve always hesitated to jump in, not knowing I’ll be able to come up with something, you know, really good — but there, I’ve committed!  Read more…

The Passing of Benedict

Antony at Coming to the Quiet posted on Tuesday about The Passing of Benedict, a day early since his feast day was yesterday. I’m linking to it a day late.

Lent. We’re getting well into the Lenten season already, but I’m still getting my head around all of it. Not coming from a church background that actually observes the church calendar or anything acknowledged to be a liturgy, some of this stuff is still settling into my psyche and finding a place to roost.

Last Sunday evening before or after (I forget which, probably after) we attended St. Benedicts Table, we talked with our kids about the season of Lent. It was noted that the colour of the priest’s stole had changed, and a series of candles at the front of the church would be extinguished, one each week, until they were all dark.  Read more…

Today is Shrove Tuesday, replete with childhood dreams of the pancake turtle, pictured here. As I describe this every year,

It is a very little-known fact, but each year on Shrove Tuesday, the Pancake Turtle travels the world with a huge stack of steaming hot pancakes perched on his back. As he travels the world on this special day, he delivers his stack of pancakes to good little boys and girls everywhere as they prepare themselves for Lent.

I know this ancient tradition may nevertheless be new to some of you, and you may even suspect that rather than having any basis in fact, it is merely something that a group of us made up one night in the 80’s after drinking way too much cinamon coffee in Winnipeg’s old Blue Note Cafe on Main Street, the haunt of such notables as Neil Young and the The Crash Test Dummies… guys who hung around or played The Blue Note before anyone had heard of The Squires or Bad Brad Roberts and the St. James Rhythm Pigs.  Read more…

Our little missional community has decided to gather next weekend and have a meal together. The plan is to bring whatever info or reflections that each of us can glean on the feast of tabernacles, and share that together — as well as the meal. I’ve said before that christians would do well to take greater note of and even find ways to participate in some of the feasts and holy days that come from our shared heritage with the Jewish people. This is Thanksgiving weekend in Canada; Sukkot (aka Tabernacles, Booths, Ingathering) has already begun, and will take us up to the point of our next meeting as a group.  Read more…