Stacey Campbell Apologizes, but Doesn’t Own Up

You know, I really wanted to leave it alone, but it’s soooo hard… I started out adding this to my Saturday links post, but the line or two of commentary that I wanted to make with it got a little out of hand. Hey, it happens. So I read Stacey Campbell’s apology for the prophecy given to Todd Bentley at his commissioning-alignment hands-on-hands-off I-did-it-no-I-didn’t extravaganza event back in June. Well, she didn’t exactly apologize for the prophecy… what she said was, “I am truly sorry for any confusion my prophecy may have brought to the Body of Christ.” And that’s good insofar as it goes — I think for many who were directly affected by the Lakeland thing, it did cause confusion. For others, not so much. She doesn’t actually say that the prophecy was wrong, but in a sense she stuck to her guns, saying “I believe that it is God’s will for Todd Bentley to walk in the glory of God.”

Included in a much longer statement where she rambles on about the glory of God, Campbell says,

I prophesied publicly on GodTV that Todd Bentley would be a “first fruits” of a generation that would walk both in the anointing and the glory of God. I would like to acknowledge, that although Todd Bentley began his ministry this way, he has not finished his race this way.

Her statement is not an apology for being wrong, but seems instead to attempt to carve out a channel by which she might say her word is simply not yet fulfilled. Reading her statement released by Flesh Fire Ministries (would you believe that was a typo? I thought not) and published by Revival Now Ministries, her and Wes’ outfit (why does the phrase, “We want revival now, dammit!” come to mind when I read that?), one gets the idea that she is perhaps sorry that people are confused about how her word is still correct. Or something like that.

It seemed to me that she was talking about an old ‘word’ and stitching it into Todd’s context and explaining what “she thought” that led to her prophecy. So (a) she must not have heard this directly from God despite the manner in which she stated it — shake ‘n’ bake ‘n’ hyperventilate — as though she had; and (2) I think the revelations that have come out would seriously call into question the point about whether or not Todd actually began his ministry walking in the anointing and glory of God. In any case, he was in sin at the time of the prophecy, so — again — it seems *highly* unlikely that her “ecstatic” form of prophecy at Bentley’s commissioning was in any way of God, unless he somehow misspoke himself in the midst of overtaking Campbell’s ability to hold her head on straight and breathe normally. She notes that the decision to separate was after the commissioning, but says nothing about the fact that the sin and situation leading up to that decision were prior to the event. She presents the view that although every generation is special, there are some that are especially special, and that she was to help prepare an especially special one.

Maybe… but I have to say that I’m sick and tired of prophetic words about the “chosen” generation or the “next” generation or things of this ilk. I’ve observed people prophesy it over their own generation, and as they age, marry, have a family, and raise children, they begin to prophesy the same thing over the “next” generation — i.e., their own kids. I don’t know, either we’re all special or none of us are… but either way, it doesn’t seem especially “prophetic” to call it out as though it were something new and not something that’s been said to every generation that has practiced prophetic ministry, bar none. It’s just some kind of misguided prophetic nepotism. How come there aren’t any prophetic words that say to teenagers, “You guys aren’t really the chosen generation, but your job is to work hard and raise good families so that they can grow up sound in the faith and pass it along to that generation, which is especially chosen for revival.” Uh, hello? Is this thing on? -tap- -tap- -tap- Oh, okay. Moving right along…

So fundamentally, as I’ve said before, this form of “ecstatic” prophecy in which Campbell engages would not appear to be genuinely “ecstatic” in the sense that it would not appear to be beyond the “prophet’s” control. She seems she prophesied from what she knew, sensed, deduced, and hoped. Not from what God said, at least not directly, and not in that moment. So how is that in any way way an ecstatic form of prophecy… other than a manufactured ecstasy? Of this type of prophet — i.e., those that get it wrong, Deuteronomy says not to fear them, they’re just false prophets who simply got it wrong. No biggie. End of story. Well, maybe it’s a biggie if it involves internationally known and recognized revivalists, prophets and apostles sitting on self-convened and organizing apostolic and prophetic councils and oversight committees. The Deuteronomist somehow omits to say anything directly to that particular situation. I’ve written before about how I don’t see this “ecstatic” form of prophecy as valid or one that should be pursued in any way, but if you don’t want to believe me and decide to go after it anyway, the teaching DVD is available (from Hero Resources Inc., no less). I have to say I really am curious how she manages to illustrate how ecstatic prophesy has been used “all throughout history.” The point of “ecstatic” prophecy is that it tends to imply that things are not in the control of the prophet, which wrongly places the words beyond judgment in a kind of echo of the “touch not the Lord’s annointed” error. Not that it’s said, but I think it’s clear: if it was ecstatic prophecy, I’m not responsible for what I just said. Unfortunately, as Stacey Campbell’s statement implies (unintentionally or not), this is not the case at all, which makes the antics appear to be just some kind of stage presence. As I said, where it appears in the Bible, it is used to humble (or humiliate) someone who is in prideful sin and not heeding God’s word. Go ahead and chase after that if you want, but I think I’ll hang my hat someplace else.

Let me say now should someone be thinking or waving a finger at their computer monitor and saying, “Yeah, but she does good work with orphans, and–” Yes. Pause. I understand that Wes and Stacey have a ministry in this area, and if you ask me, these kinds of ministries 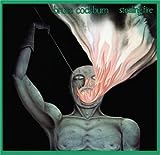 bring credit, fame, and glory to God’s name. The kind of shenanigans carried off in the name of the revival-chasing prophetic do not. One is fairly clearly others-centered, and one has thus far been exhibited with a big-stage me-first, bless-you-with-what’s-left if it’s big-enough-to-go-around mentality, where the stars of the stage get most of the glory. I imagine the cover art to Bruce Cockburn’s “Stealing Fire” album and think of “Stealing Glory.” You’re gonna get burned, baby.

I guess I found it galling that in the midst of Campbell’s statement, she neglects to mention that she was wrong and apologize for that. In my own experience of the prophetic ministry at my CLB, I recall an occasion where someone gave a personal word publicly, but the person to whom it was given denied its accuracy. An apology was made publicly, though the fact of the matter is that everyone close to the recipient of the word believed it to be true and accurate. Didn’t matter: in order to avoid confusing anyone and not to assert oneself over another with a “thus saith the Lord” attitude, the prophet in this case apologized and moved on.

This is a fact of ministry… sometimes you have to take the lumps, even if you get it right. If you get it wrong, of course, this should be much more axiomatic than it would appear to be.

Now I know some of the people involved in this prophetic ministry, and I used to be one of them. I used to run with some of the Manitoba leaders in Stacey & Co.’s Canadian Prophetic Council. I continue to believe in the prophetic gift, but I desperately want to see it used to bring credit to God’s name, not discredit, honour rather than dishonour, fame rather than infamy, and to bring glory to him rather than to the prophet. It’s high-time for the prophetic ministry to be re-imagined in a glory-shunning everyday manner, just as those who would be apostles need to return to the end of the procession where Paul said their place is. Yes, that’s right — it’s simply another call to humility. Which reminds me, in March of 1999 a number of churches in Winnipeg sponsored a “School of Prophetic Ministry”. There were six general sessions over three days, and on the Saturday morning (I know this because I just dug out my notes) I addressed the assembled group of prophetic characters on “The Importance of Good Character” to the prophetic ministry. After a bit of an overview of key character traits and spiritual disciplines for helping to develop some of these, I presented humility as the foundation for all. Conversely, I said that of the “Seven Deadly Sins,” pride was the “granddaddy,” and I discussed how it is a gateway to many other forms of sin. In fact, I might say almost every other form of sin.

These days, I’m more happy to be post-charismatic than ever. Stacey, you got it wrong. Now own up to it. Anything less perpetuates the confusion for which you are apologizing. Or justifying your words, whichever.